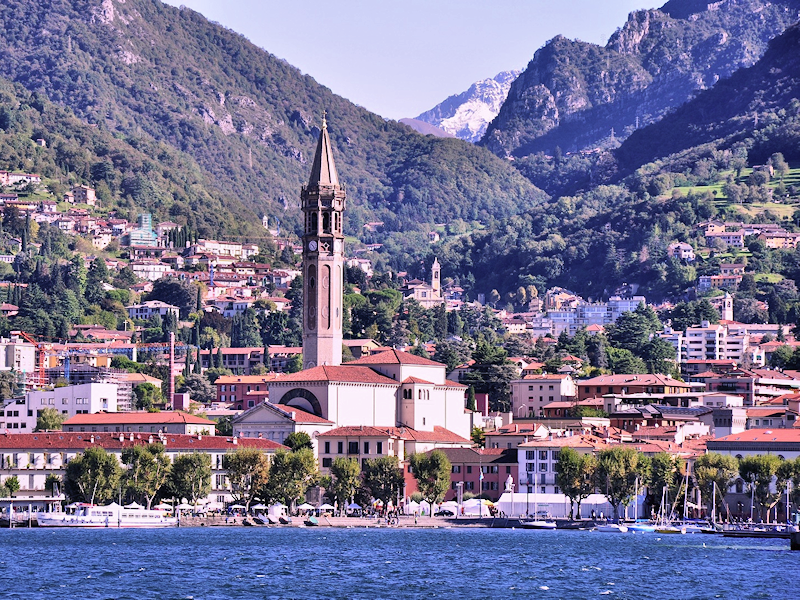 Is situated on the extreme southern point of the eastern shore in a flat area surrounded by rocky mountains that remind us of the Dolomites. What today is a dynamic town, once was the village that inspired Alessandro Manzoni to write is novel “I Promessi Sposi”.

Lecco is in an attractive mountainous landscape setting and the peaks of the mountains Monte Barro, San Martino, monte Due Mani and especially the Resegone appear aligned in a row like teeth of a saw. The lakefront is the most charming part of Lecco and the Canottieri Lecco has been offering water sport facilities for over a century (swimming, canoeing, rowing). The tourist, sport and mountaineering importance of Lecco is of notable importance (the ragni di Lecco - Lecco spiders are famous, enhanced by excellent ski lifts).

Inhabited in the prehistoric age, a fortified village, and then a Roman municipal, important village in the Middle Ages, a free Municipality in the 12th century, therefore enemy to Como during the ten year war, Lecco then passed under the yoke of Della Torre and the Visconti. Proverbial is the laboriousness of the people of Lecco, in the Middle Ages in the working of the cocoons and the spinning of silk, nowadays in the iron-and-steel and metallurgic industry, Lecco today places itself among Lombardy’s most active centres.

Villa Manzoni is a neo-classical style building will satisfy the lovers of history, literature and painting. This elegant residence belonged to the Manzoni family from 1710 to 1818 and in 1963 it was bought by the town council of Lecco.The residential building unwinds around an courtyard arcaded with sandstone columns, incudes cottages and a large garden in the back, which plays part of a vast park.  On the ground floor there is the Manzonian museum, while on the second floor there is the Town Council’s gallery. In the section dedicated to the famous writer of the “Promessi Sposi” there are some antiques of Manzoni and some original furnishing. The Museo Manzoniano extends across 10 rooms, and early editions, manuscripts and memorabilia relative ot the life and works of Alessandro Manzoni can be seen there. The ground floor settings still have the original furnishings from 1818, when the writer sold the villa. In the courtyard, to the left is the tomb of Alessandro Manzoni’s father. The ground floor is made up of the Sale Manzoniane (Manzoni rooms) where documents, memorabilia, the writer’s furniture, etc. are placed; on the first floor is the Galleria comunale d' Arte (Local Art Gallery), open in 1938, which holds paintings by Lecce artists, a substantial collection of works by Ennio Morlotti, the collection of prints and the library.The Galleria Comunale d'Arte (Local Art Gallery) displays works, from the 11th to the 20th century, of artists from Lecco or those having work in the territory. The local artists collections include 400 paintings and 2000 prints and engravings.