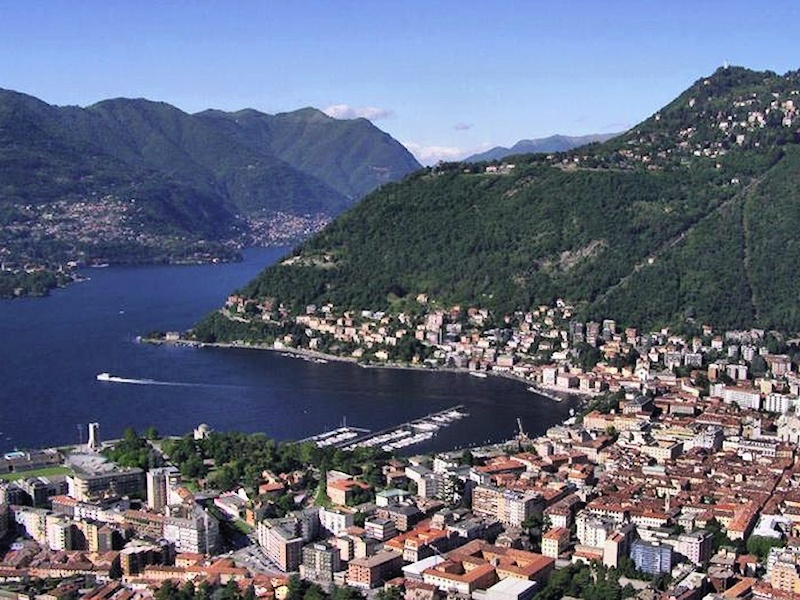 Como is located at the southern end of the west branch of the Lake, on the borderline with Switzerland and 40 kilometres far from Milan. Como is the city which gives the name to the entire lake.History tells us that this area, before being conquered by the Romans in 196 B.C., it was inhabited by Orobi (a Celtic tribe) and Comenses. Consul Gaio Scipione, brought three thousand settlers, others then followed, bringing new activities such as olive and vineyard cultivation.The city has still the appearance of the original Roman "castrum" with its well-preserved medieval walls and some big watchtowers.

The City of Como lies at the base of Mount Brunate and is surrounded by hills and the Alpine foothills that watch over the southern part of Lake Como.

It is actually its most important centre for art, transport and economy.

Famous for its lake, for its villas with florid parks and secular trees, for its famous "vip" guests, Como can offer you every kind of solution for your spare time.
Cultural routes are ready. From old Romanesque churches to Rationalist architecture, Como is reach in proposals, and the nearly valleys are full of opportunities for mountain lovers, who through wild environments and unspoilt valleys can try out every kind of experience that this natural setting can offer.
You can enjoy for your daily trips boat, ferries, hydrofoils and seaplain too!! In Como you can find the only European school where it's possible to obtain a pilot licence for this kind of vehicle.

A visit to the city, at least for that concerning the historical city centre, can be done only by foot, since automotive traffic is prohibited.

The visit to Como, therefore, becomes even an interesting testimony of how it is possible even today, to operate at a city planning level in historical centres, without distorting them, while making the most of their historical roots of a community. 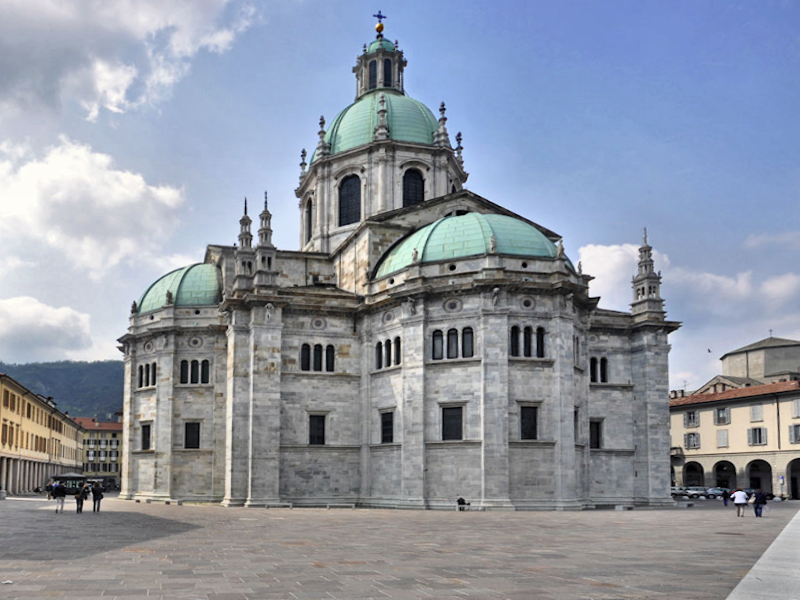 Cathedral (duomo), (a short walk from the waterfront down Via Caio Plinio II). Como's richly decorated 14th century Gothic-Renaissance Cathedral. Was the last of the Gothic cathedrals built in Lombardy: it was begun in 1396, ten years after the foundation of Milan 's Duomo.The initial design (1396) is due to Lorenzo degli Spazzi of Laini d'Intelvi, but this was then partially modified by Pietro di Breggio (Como) and by other successive artists. Its interior is divided into three naves by ten cruciform pillars with pointed arches of various amplitude and cross vaults. The two statues, Plinio il Vecchio and Plinio il Giovane located at the sides of the portal, are the work of sculptor Tommaso Rodari of Moriggia. An altar and a fresco by A. De Passeris come from the destroyed Saint Maria Maggiore basilica.

Among the many works of art which adorn the interior, we point out the 16 th century tapestries, the distinguished paintings of Gauedenzio Ferrari, of Bernardino Luini, and Morazzone (16 th -17 th centuries), the frescoes of the sacristy (first half of the 17 th century).

Como's Duomo is 87 metres long, the naves, including the major chapels are 36 and 58 metres wide, the dome is 75 metres high and the façade's steeple rises 45 metres above the piazza's floor. The dome was designed by Filippo Juvara (1687-1736), architect to the King of Sardinia. The 19 th century stained-glass windows were designed by Giuseppe and Pompeo Bertini. 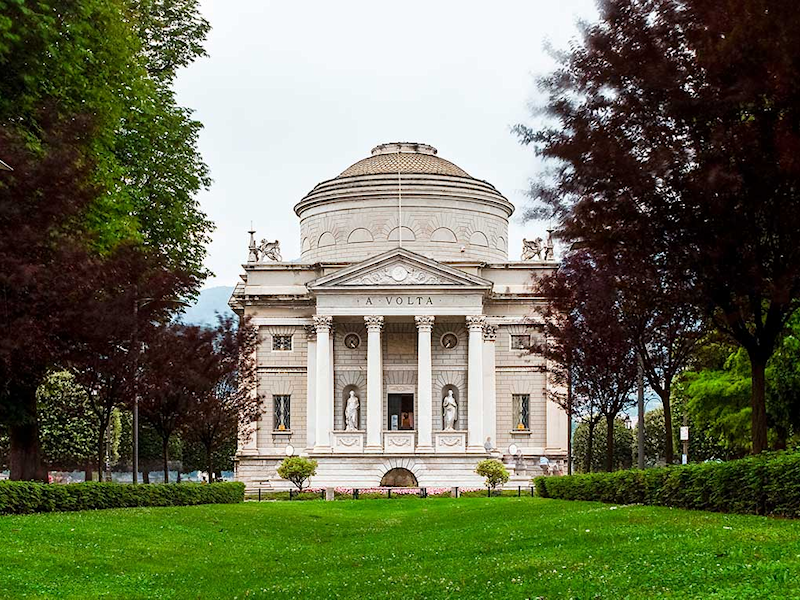 Neoclassical temple was built on the shores of Lake Como in 1927, in honour of  Alessandro Volta, the Como born physicist who invented the battery. A visit to Como without going to see the Volta Temple is unthinkable.

Temple was designed by Federico Frigerio, it has the form of a quadrilateral neo-classic temple, preceded by a spacious Corinthian pronao with the statues of Faith and Science by Carlo and Luigi Rigola, inside there is a vast circular room surmounted by dome.

The museum houses a varied mix of items related to his life and a rich display of scientific instruments showing his researches and experiments in the field of Physics, among which the first voltaric pile. 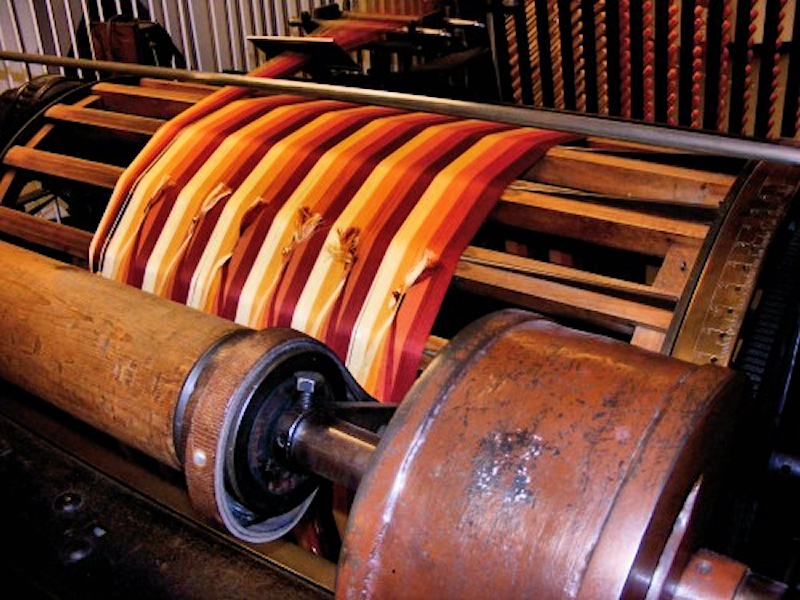 Como was an important town in the silk trade, and around the lake you'll still find shops selling high-quality Como silks. There is a museum dedicated to silk, the Museo della Seta, located just outside the centre of town.
The Museum presents a true account of the history of Como's famous silk industry. Through its display, it highlights the silk's journey from silkworm breeding to the finished fabrics. The museum holds many interesting machinery and instruments.
FaLang translation system by Faboba