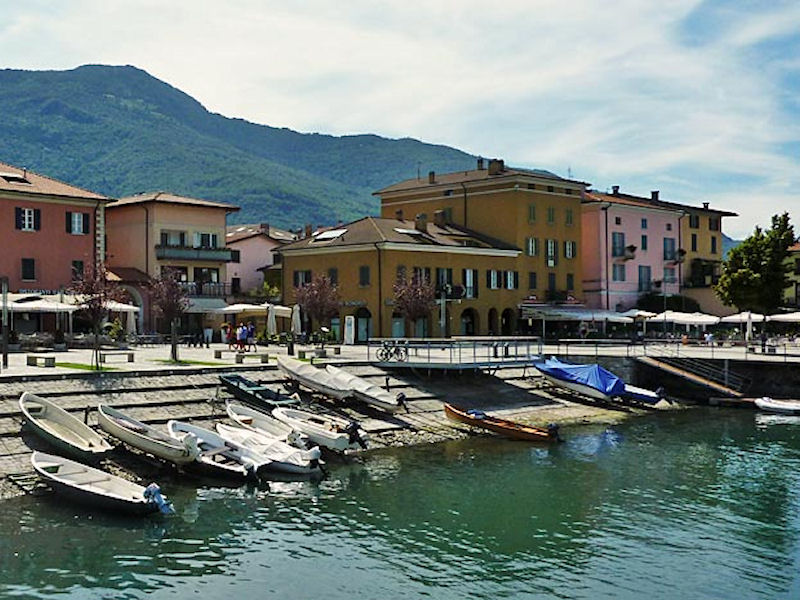 Colico is the last town of the eastern shore of the Lecco branch of the lake, is surrounded by a magnificent backdrop of mountains dominated to the east by the Legnone, to the north by the peaks of Chivennate among which the Sasso Manduino and to the west by the peaks of the Alto Lario.

It is a major tourist and transit destination, located at the convergence of the roads coming from Lecco, Chiavenna and Sondrio, from other side from the plains and from the pre-Alpine passes coming from Switzerland and Austria.

Colico was already inhabitated during the roman and pre-roman period, it was fortified during the municipial period, devastated by the passing through of foreign troop who were heading for Milan, by epidemics and by the repeated floods of the Adda river.

Nearby Colico there is the Plan of Spain, today the most extensive and important nature reserve in Lombardy.

The most important event taking place in Colico is the Italian stage of the World Cup of kitesurfing. A classical music festival, Musica sull'Acqua (Water Music), takes place in Piazza Garibaldi and at the Abbey of Piona. The feast of San Rocco is celebrated on 16 August in the homonymous church. 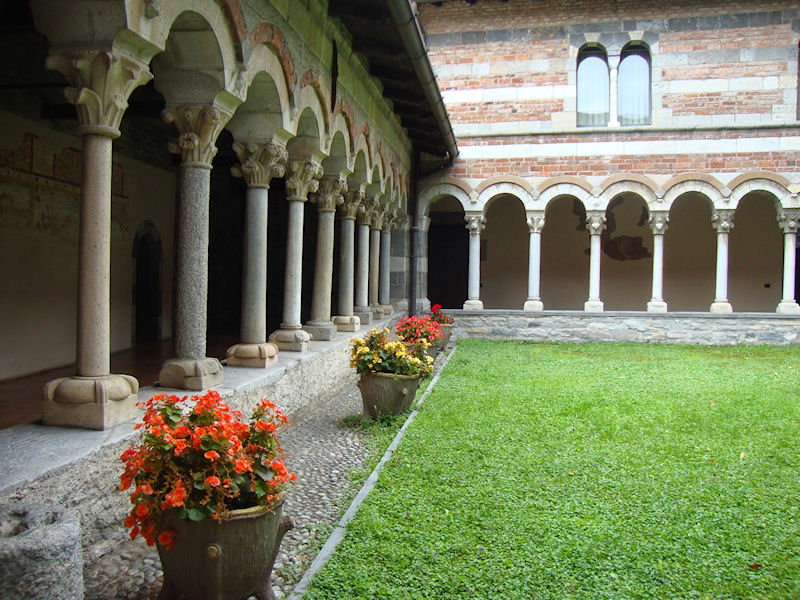 The abbey is set at the top of a small peninsula, the Olgiasca, which – like a crooked finger – points into the lake, creating an inlet.

The Abbey of Piona is a typical art building of lake of Como made of stones and has the square shapes. This rare gem of Lombard Romanesque architecture  location is accessible and easily reachable by the boat.

It was founded by monks from Cluny around the church of St. Nicholas, built on the ruins of a chapel built by the Bishop of Como Agrippino in the seventh century. It was transformed into a secular commendam abolished in the eighteenth century and restored in the beggining of twenteenth century, and it belongs to the Cistercensi friars of the Latium abbey of Casamari.

The Abbey is located on the peninsula Olgiasca, facing Gravedona on the tip of the Lecco branch of the lake, and offers a panoramic view on the west coast of the lake and the peace that the Cistercian monks enjoy as they still live there today. The Abbey of Piona produces handmade liquor, including the famous liquor called “Imperial Drops”. 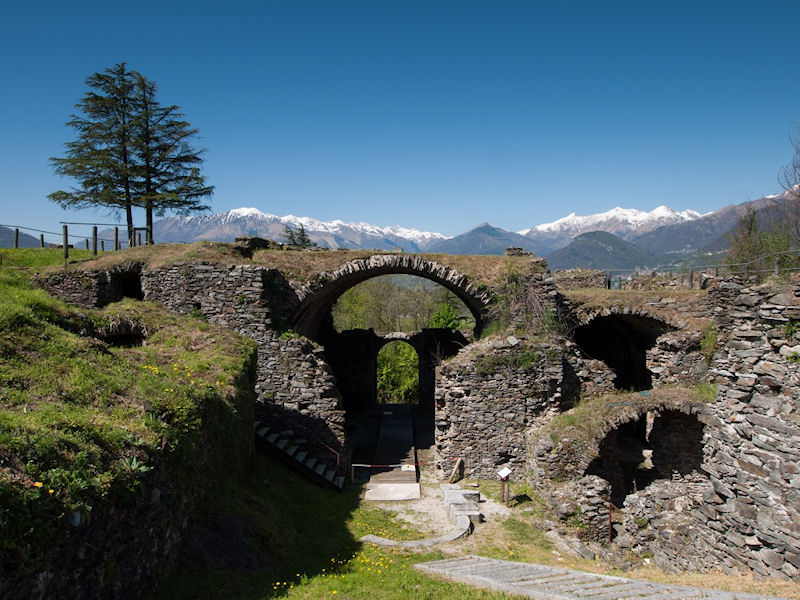 The Fuentes Fort, built in 1603 by Pedro Enriquez de Acevedo, Count of Fuentes and Milans Governor was a crossroads for innumerate troops: Spanish, French and Imperial. The fort was built as a bulwark of the border between the Milan Duchy and the Duchy of Grigioni. Because of his strategic position the italian army used it during the First World War and built cannon-sites that still exist today. The Fort Fuentes was militare active until 1782 when was dismantled by the Austrian's and afterwards partially demolished by the French in 1796.

Today Fort Fuentes belongs to the district of Lecco, and constituites an important testimony of the north lake history. 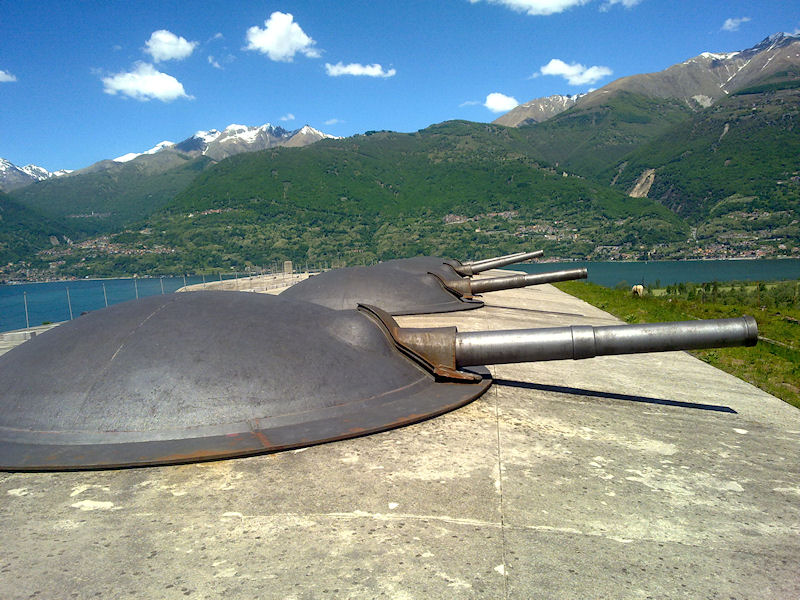 Throughout history the Valtellina has always represented one of the major commercial arteries to and from Northern Europe. But, at the same time, it was one of the main directions of transit of invading armies. Colico was the ideal location for a stronghold. 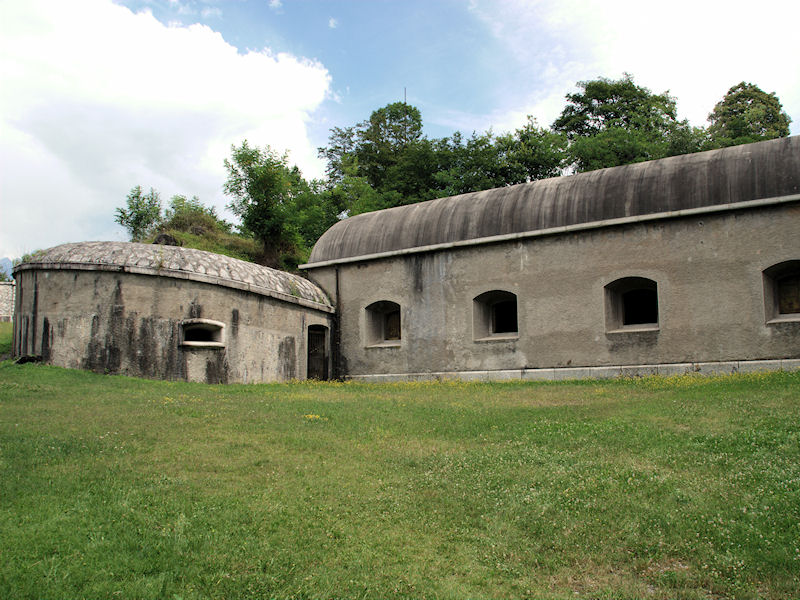 The fort is today one of the typical buildings designed at the beginning of the century, by General Enrico Rocchi who is considered a genius of military constructions of the time. It is a structure completely in concrete and stone, two-storey, with the military built accommodation in a separate wing from the main building. The two buildings are connected, thanks to a tunnel excavated in the rock and protected by times of the thickness of about two meters. On top of the building are positioned, in revolving facilities and protected by steel and cast iron domes, four guns. This is the most modern weaponry used in Italian fortifications during the First World War.

The four pieces are the only original preserved to this day. It is weapons produced by the French firm Schneider, since the Italian war industry was not able to provide necessary cannons for all the fortifications. The pieces, model 149/35 S, in addition to being the largest cannons in Italy, are still fully functional. Although, clearly, the elimination of the firing pin prevents to use them to shoot. Each piece, in addition to rotating about itself, has the ability to make a get up between -8 ° and + 42 °. It also has a brake, a recovery unit and a device with compressed tunes that allows the barrel to expel the gases produced by the explosion. Each cannon, weighing 3,800 kg, could use different types of projectiles.

The fort preserves  not only the four imposing French cannons 149/35 placed in a swivel seat under a rotating armored dome, but also preserves the original electrical system, the original armor plated doors, and windows besides a complex ventilation system and water supply. The four pieces of artillery, capable of a range of about 8.699 miles, were intended to control the lower Valtellina, and the lower Val Chiavenna besides the northern portion of the Lake Como. Thanks to the wonderful location of the fort, and the range of fire of the armored battery, you can enjoy a splendid panorama of the upper Lake of Como.